Series Eleven contains 60 cards to be distributed in random order on CAT Scale tickets through Fall of 2011, featuring a mix of antique and newer model trucks. Each time a driver weighs on a CAT Scale they will automatically receive a collector card. The cards are adhered to the scale ticket with a clean release glue that allows the card to be delivered to customers unmarred.

Collector books, to protect and display the cards, are available through participating CAT Scale locations and can also be ordered on-line at http://www.catscale.com in the merchandise section of the web site. Each collector book contains plastic sleeves to hold a complete set of cards.

CAT Scale Super Trucks Limited Edition collector cards were first released in 1994 and popularity has exploded among the trucking community as well as the general public. “The Super Trucks Limited Edition collector cards have been more popular than we ever imagined. It is nice to see so many embrace this program as it really helps promote a positive image of trucking and professional drivers. Many drivers save the cards for their children, neighbor kids and the children in their Trucker Buddy classes,” says Heather DeBaillie, Marketing Manager. “Having ones truck selected to be featured on a CAT Scale Super Trucks card has really become an honor in the industry.”

For drivers wanting to apply to be featured on a future set of cards, the application may be downloaded from the CAT Scale web site in the Super Trucks Collector Cards section at http://catscale.com/supta.pdf. 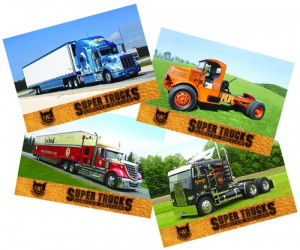